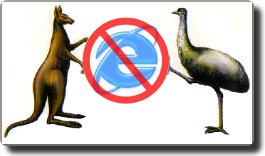 Australia has joined the list of countries with official guidelines suggesting that you consider giving up on Internet Explorer, at least until Microsoft has fixed the now-widely-known vulnerability in its browser.

France and Germany have floated similar advice, presumably over concern that this vulnerability seems almost certain to be implicated in the Operation Aurora attacks against Google and other companies.

Sophos readers seem to agree with the public servants. A Sophos poll which opened last night showed by this morning that 72% of respondents supported switching from IE, with just 28% happy to stick with it.

Interestingly, 59% of those surveyed aren’t just saying Oui-Ja-Yes to an alternative browser, they are saying Non-Nein-No to Microsoft’s browser for ever, arguing for a permanent change away from Internet Explorer. This is something of a slap in the face for Microsoft’s much-vaunted promises of trustworthy computing.

Similarly, an article in this morning’s Sydney Morning Herald taking a centrist view in the “ditch IE” argument has already received a barrage of comments, most of them taking potshots at Microsoft and IE. (And, it seems, at me, for daring to imply that browsers other than IE might be fallible).

Is a temporary browser switch really a good idea?

Companies which are not already supporting a browser other than Internet Explorer might be biting off more than they can chew if they switch abruptly.

All browsers have vulnerabilities, and even though it’s true that IE is exploited more than any other browser, you don’t achieve security simply by switching. That’s security through obscurity, which is merely false security. Good security means defence in depth, and, in a well-defended network, a single unpatched vulnerability in your browser shouldn’t really be enough for the bad guys to get in.

Some of the possible problems with a temporary browser switch include:

By all means, switch away from IE if you are comfortable with doing so. But even if you do, you still need to practise defence in depth and to shield your browser from the internet. In fact, if you haven’t already considered it, why not take a look at Sophos Web Security and Control?

And be sure to let us know what you think about binning IE: vote in the poll yourself!