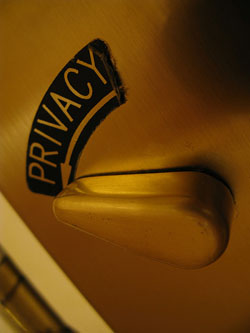 My wife has recently had an issue that illustrates why privacy is important, even in 2010. And without further commentary I share with you Mrs. Wisniewski’s guest blog.

I’m a full-time student. About two weeks ago, I started getting bizarre emails from a classmate who wants very badly to make me his new best friend. I have never spoken to this person in class, nor he to me; I simply made the mistake of sitting next to him. He was able to email me because the course website allows students to view a list of their classmates’ names and email addresses.

On the first day of class, our instructor suggested that we exchange emails and phone numbers in case we miss lectures and need to find out what happened in class. I always use a throwaway address like Gmail with people I’ve just met, and my criteria are even stricter for giving out my phone numbers. However, thanks to the course website, this guy now has my full name, a detail I never would have given him.

After a week or so, it was clear the situation was getting more serious and he probably wouldn’t stop without the school’s intervention. He’s not threatened me in any way, but I can’t tell you how uncomfortable the persistent emails alone make me, not to mention spending hours in the same classroom with him.

I naturally began to consider in what other ways he could contact me. On the various social networking and online community sites I use, I don’t used location-based services, never post my regular comings and goings, and seldom post more than the vaguest personal information. I used the advice in the Sophos Facebook best practices guide to lock down my settings as tightly as I could. I only share phone numbers with a trusted few.

If this guy follows the Google chain, he might be able to come up with a secondary e-mail address, but not my primary. Unless he’s really intent on bothering me, the most I expect to have to deal with is email and face-to-face contact at school. In other words, my life is not completely disrupted as I run around trying to secure my privacy before this guy finds out everything he needs to know in order to bother me. I can go about my business almost as if nothing has happened. I can sleep at night.

I informed my professor of the situation, and she’s learned a lesson too. She said next semester she’ll make sure her students only disclose email addresses and not phone numbers.

So what about Mark Zuckerberg’s claims that blasting open everyone’s privacy is the new social norm? We have other social norms, too: that people can’t discriminate against you, that they shouldn’t impersonate you, that, when the female student they’re harassing says “Stop emailing me,” they have a duty to leave her alone. As long as people behave outside the social norms — as long as there is prejudice and predatory behavior — we still need these protections.

This is an issue of “Majority rule, minority rights.” No matter what the majority of people have grown comfortable with, we have an obligation as a society to protect the vulnerable among us.

I didn’t expect to count myself among that number. This creepy guy probably couldn’t have chosen a worse target, but the fact remains that he chose me. He could have chosen any of us.

Maybe I should ask Mark Zuckerberg if he’d like a new best friend. I’ve got a spare one for him. Brand new. Never used.