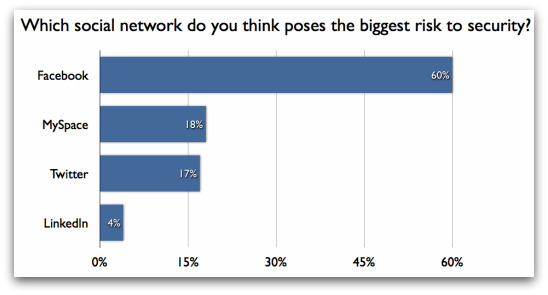 One of the nuggets of interesting data inside the newly-published Sophos Security Threat Report 2010 reveals which social network people believe poses the biggest security risk.

We polled over 500 firms, and 60% felt that Facebook was the biggest danger: We shouldn’t forget, of course, that Facebook is by far the largest social network – and you’ll find more bad apples in the biggest orchard.

The truth is that the security team at Facebook works hard to counter threats on their site – it’s just that policing 350 million users can’t be an easy job for anyone. But there is no doubt that simple changes could make Facebook users safer. For instance, when Facebook rolled-out its new recommended privacy settings late last year, it was a backwards step, encouraging many users to share their information with everybody on the internet.

Although LinkedIn is considered to be by far the least threatening of the networks, it’s worth remembering that it can still provide a sizeable pool of information for hackers.

Targeted attacks against companies are in the news at the moment, and the more information a criminal can get about your organization’s structure, the easier for them to send a poisoned attachment to precisely the person whose computer they want to break into.

Sites like LinkedIn provide hackers with what is effectively a corporate directory, listing your staff’s names and positions. This makes it child’s play to reverse-engineer the email addresses of potential victims.

If you haven’t already done so, download the Sophos Security Threat Report 2010 now.