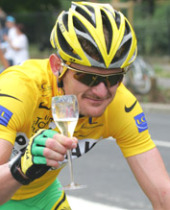 A US cyclist who was stripped of his title of Tour de France winner in 2006, after being found with unusual levels of testosterone in his body, is wanted in connection with an alleged hack attack against the French anti-doping agency’s laboratory that tested him.

A French judge has issued an arrest warrant for Floyd Landis after he failed to appear to testify in a case that has been rumbling since late 2006, when the Paris-based laboratory discovered a Trojan horse on its computer system that could allow remote hackers to download files.

Lab director Pierre Bordry has claimed that hackers stole data (some of which was allegedly tampered with to make it appear that the samples had not been handled appropriately) in an attempt to discredit tests conducted by his team of scientists.

For his part, Landis has denied any involvement in the hack and described the accusations against him as “character assassination”.

Most hackers break into computer systems to make money, of course. I’ve heard of cybercriminals attempting to spy on their co-workers, get revenge on a former employer, and even improve their examination grades, and even attempt to blackmail Formula One racing drivers, but I don’t think I’ve ever quite heard of a case like this before.