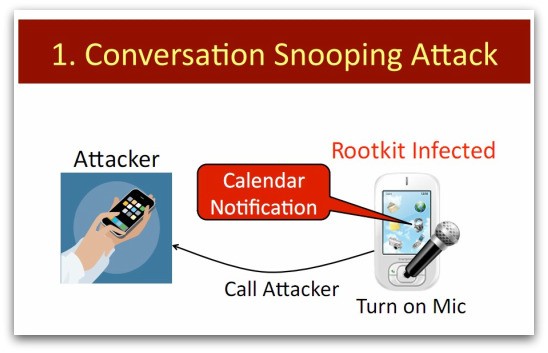 Liviu Iftode and Vinod Ganapathy, two researchers at Rutgers University, have revealed some experiments they have been conducting, showing how rootkits could be used to take control of smartphones.

The scientists have shown that a malicious attacker could cause a smartphone to “eavesdrop on a meeting, track its owner’s travels, or rapidly drain its battery to render the phone useless”.

It’s a cute little video, but how realistic is this threat in reality?

I don’t think the kind of attack described by Iftode and Ganapathy is a big deal right now.

Yes, it is possible to change or put software onto a smartphone (by, for instance, installing a rootkit) so that the mobile device then performs malicious functions. For instance, code that enables covert remote surveillance, battery drainage or silently steals data.

Of course, this relies upon the smartphone allowing you to make changes to its low-level software. Popular smartphones like the Apple iPhone lock down that kind of meddling to a great extent.

So, the key thing to remember is that the bad guys have to somehow get the malicious rootkit onto your phone in the first place.

How are they going to do that?

They would either need to have physical access to your smartphone, exploit an unpatched security vulnerability or use a social engineering attack to trick you into installing malicious code. Even if they went down the “trick” route they would be relying upon the phone’s OS to allow you to install unapproved apps (iPhones, for instance, are strictly controlled by their Cupertino-based overlords, allowing users to only install code that has been approved and checked by the AppStore).

So it doesn’t sound like what Iftode and Ganapathy are describing is actually any different from the rootkits that infect traditional desktop computers. The main difference is that there are probably less opportunities (and thus much harder) to infect a mobile phone than, say, a computer running Windows.

Furthermore, I would argue that the typical mobile phone user is still typically less used to installing applications from untrusted sources than their Windows counterparts, and so the chances of success via fooling the user into installing a dangerous application can be assumed to be even lower.

Iftode and Ganapathy have not demonstrated any revolutionary new way of getting round the biggest hurdle for those wanting to spy on smartphones: how are they going to get the malware onto the phone?

If I really wanted to snoop on someone’s phone I think it would probably be easier to swap my victim’s mobile phone for an identical (but bugged) device rather than go to all this effort with no promise of success. Sure, the mobile phone malware threat is growing – but it’s a tiny raindrop in a thunderstorm compared to regular attacks that strike Windows computers. Slowly but slowly it’s becoming more serious (the recent discovery of financially-motivated malware that targets jailbroken iPhones is proof of that), and undoubtedly we will begin to see more users running anti-virus security on their phones in the years to come.

However, if I was responsible for securing my company’s mobile phones I would be much more worried about the real security threat of staff losing their phones in taxis or on the train, rather than the theoretical risk of surveillance rootkits.

It’s a nice video and presentation that Iftode and Ganapathy made, but I won’t be losing any sleep over it just yet.

More information on the topic of smartphone rootkits can be found in the paper Iftode and Ganapathy have produced: “Rootkits on Smart Phones: Attacks, implications and opportunities” [PDF]