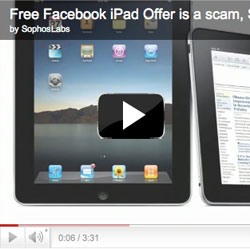 Sometimes things can be too good to be true. For instance, you may be desperate to get your paws on the latest desirable gadget – the Apple iPad.

Scammers have created pages on Facebook claiming that you can be the lucky recipient of an Apple iPad if you simply register to be a beta-tester. Not only will they supply you with an iPad for free, but they’ll also let you keep the iPad at the end of the beta-test. What could go wrong with that?

Hmm, well, as the following YouTube video explains, this is a scam which is using the lure of a free Apple iPad as bait for you to hand over your cellphone details:

The bad guys create a Facebook page, with a suitably alluring offer (in this case “iPad Researchers Wanted – Want to beta test Apple’s latest product?”). This encourages you to “Become a fan” of the page (which, in itself, helps advertise it to your other friends on Facebook)

They then encourage you to invite all your friends to also become fans of the page, via a handy button. They say that this will increase your chances of being accepted for the bogus promotion. Of course, in reality, it increases the number of people who might be taken to the cleaners by the scammers. Finally, Step 3 says you are ready to “Apply”. However, although you are taken to a page which is designed to look like an official form on the Apple website, it is quickly overlaid by a pop-up survey.

In the example above I was asked to take a survey to prove I was a “human”. After answering questions which supposedly would determine if I was more like 50 Cent than Kanye West, I was asked to fill in my contact information – including date of birth and mobile phone number – before I could continue to register for my free iPad. And that’s where the scam happens. The hackers who created this page are trying to sign you up for a premium rate cellphone service, that will charge you something like $10 a week until you unsubscribe.

Of course, this isn’t an official beta-test at all, and Apple aren’t going to send you an iPad for free. You will need to queue up like everyone else when they are released, and buy one like the rest of us (provided you have pockets big enough).

The good news is that after I alerted Facebook’s security team about this page they disabled it very promptly. However, the bad news is that there are many other similar Facebook pages being created on the social network designed to scam unsuspecting users.

Not all of them pretend to offer an iPad, so be on your guard for other scams too. The most important thing to remember is to not invite your friends to any Facebook page or application until you have thoroughly researched what it’s about. Furthermore, you should never be tempted to hand over your mobile phone number to some daft internet quiz.

Sadly, judging by the number of people who already said they were “fans” of the iPad offer, thousands have already fallen for the scam. If you made the mistake of clicking on the link you would be taken to a webpage like the one shown below, claiming again to offer a free Apple iPad: Thanks to Clu-blog reader Ian for alerting me about this Facebook page scam.