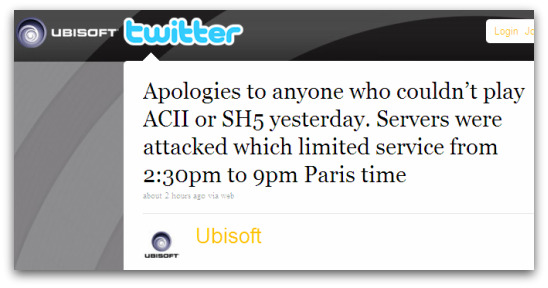 Suspicions are being raised that disgruntled online games players were behind an attack which bombarded a Ubisoft server with traffic over the weekend, effectively bringing game-playing to a standstill.

Video games publisher Ubisoft tweeted an apology to fans of Assassin’s Creed II and Silent Hunter 5, after many PC gamers were left unable to play yesterday as a result of the attack.

According to reports, thousands of users found the Assassin’s Creed II game unplayable this weekend after Ubisoft’s controversial DRM (Digital Rights Management) system failed to work properly – presumably as a result of the attack.

Many game players were left waiting a long time this weekend as their game installation repeatedly failed to connect to Ubisoft’s embattled DRM servers. The DRM system, which is intended to check whether the user is playing a legitimate or pirated version of the video game, has been the subject of much online grumbling after angry users complained that it required them to make an internet connection even if they weren’t planning to play a multi-player game. It seems likely, therefore, that someone has taken matters into their own hands and attacked the Ubisoft’s servers directly.

I’m a terrible video game player, and well used to the feeling of frustration as a game proves too difficult (normally a young nephew will step in and show me how it’s done), and I can understand that some users may feel a DRM solution like the one Ubisoft is implemented is too draconian.

But it’s no excuse for launching an attack which disrupts a games company’s servers. If you don’t like the way they do business, don’t buy their games. It’s as simple as that – show your disapproval by not buying their products anymore.

An attack against their servers, inconveniencing many of your fellow players, can never be justified.