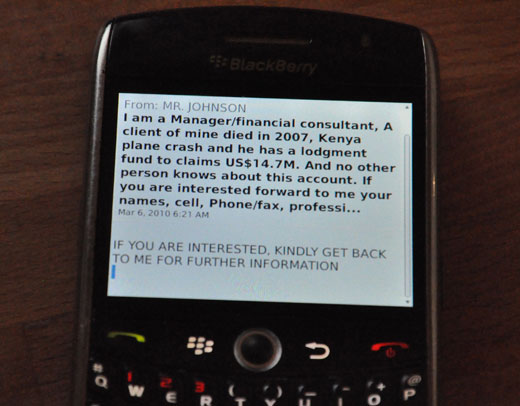 Hold on to your popcorn everybody, because what I’m about to say might shock you.

Take the fairly typical Nigerian 419 scam I just received on my BlackBerry, for instance. “Mr Johnson” writes to me from his Mobile Me address, but unfortunately he’s placed the meat of his message about the $14.7 million he would like to share with me in the subject line of his message rather than the body.

You would have thought a “Manager/Financial consultant” would have been a little more careful when sending such an important email.

Or maybe he thought that putting so much detail in the subject line would encourage the unwary to do business with him?

Whatever the scammer was thinking, it’s failed on this occasion. I’m not biting, and I suggest you don’t either.