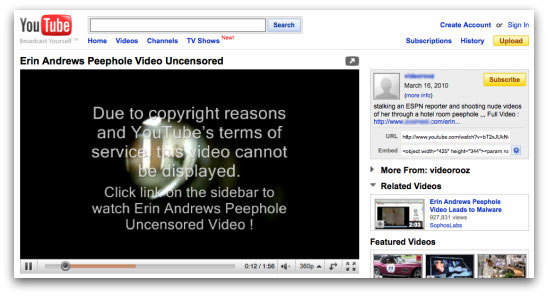 Remember the ghastly story from last year of how ESPN sports presenter Erin Andrews was secretly filmed naked in her hotel room?

The video was predictably posted on the internet. If that wasn’t unsavoury enough, hackers weren’t slow to take advantage as they created webpages that pretended to be the video but really installed malware onto your Windows or Mac computer.

For example, in the following YouTube video I show how one hacking gang created a webpage which pretended to be the CNN website, in its attempt to fox you into believing you were watching a “safe” version of the video:

The good news is that Michael David Barrett, the man who secretly shot the video through hotel room peepholes, has now been sentenced to 2.5 years in prison.

The bad news, though, is that hackers and spammers are still taking advantage of interest in the Erin Andrews peephole video. Indeed, searches for the video appear to have increased due to the headlines of Barrett’s sentencing.

As well as webpages, scores of uploads have been made to YouTube since yesterday’s sentence claiming to contain footage from the controversial video. Typically, when played they will display a message saying that for copyright reasons they cannot show you the video – but instead urge you to click a link to a third party site. That link to a third party website may simply be designed to drive traffic to a spam page, or lead to a page which asks you to sign-up for a service, take a survey or carry malware.

At least in the above example YouTube shows a link to a “related video” – in fact, the one I made discussing the danger! The bad guys can’t be too happy about that. 🙂

Hunting for the Erin Andrews video footage, or clicking on links which appear to be associated with it is a very dangerous game. If you’re really desperate to look at pictures of a naked woman my advice would be to go and buy yourself a dirty magazine – don’t put your computer at risk.

As for Erin Andrews herself, she is clearly still shaken by the experience but is attempting to rebuild her confidence. It was recently announced that she will be a contestant on ABC’s new season of “Dancing With the Stars.”