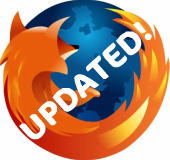 Mozilla has responded to concern about a critical security vulnerability in Firefox 3.6, by releasing version 3.6.2 of its popular browser ahead of schedule.

As I blogged yesterday, concern about the bug was so high that the likes of the German government had advised internet users to switch to an alternative browser until a fix from Mozilla was available (at the time that fix was not scheduled until March 30th).

However, concern about the severity of the security flaw encouraged Mozilla to accelerate its timetable for release and speed up the schedule.

If you are a Firefox 3.6 user, go to the Help menu and choose “Check for Updates” to update your installation of Firefox to the latest version. You can also visit www.getfirefox.com if you wish to download the full version.

I would also strongly recommend that all Firefox users consider using NoScript, the Firefox addon that provides a higher level of protection by allowing you to choose which websites are allowed to run active content (such as JavaScript).