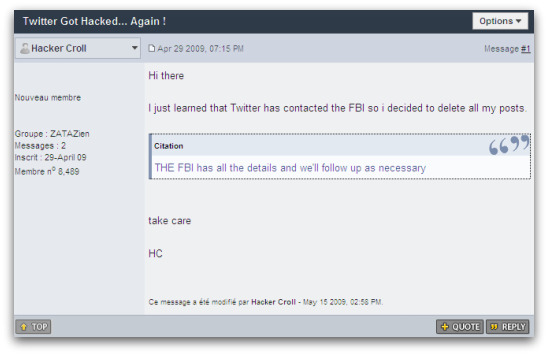 A French hacker who is alleged to have broken into Twitter’s internal administration system, giving him access to the details of millions of Twitter users including those of Barack Obama, Britney Spears, Ashton Kutcher and Lily Allen, has been arrested by French authorities.

The unemployed 25-year-old man, who still lives with his parents and goes by the online handle of “Hacker Croll”, was questioned by police in Clermont-Ferrand, and according to French police explained how he gained access to Twitter’s internal systems in April 2009, exposing the email addresses of celebrity accounts, mobile phone numbers (if one was associated with the account), and the list of accounts blocked by the affected user. Adeline Champagnat, of the French cybercrime unit, said that was able to access information about the famous Twitter users by breaking into accounts belonging to Twitter’s own staff. Potentially that meant that he could view information about all of Twitter’s users.

Although Hacker Croll posted information about the celebrities and screenshots of the stolen information on websites, it is not being claimed that he benefited financially from the hack – something which may play to his favour in a future court case.

Nevetheless, not profiting financially from a hack does not make it legal.

As the heat turned up on Hacker Croll last year, and the FBI shared information with the French authorities, the hacker removed details of the hack from internet message boards: Hacker Croll is scheduled to appear in court on June 24th.