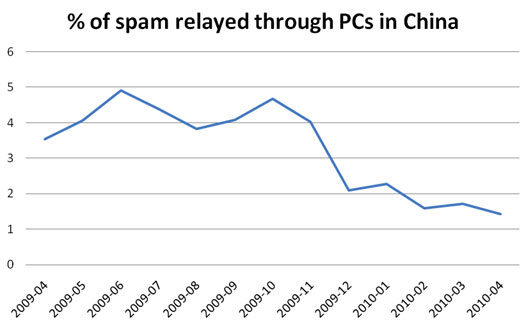 China gets a lot of flak from various corners of the globe for being a hotbed of cybercrime, and so it’s only fair to report when there’s some good news coming from behind the bamboo curtain.

The latest “dirty dozen” stats from Sophos, examining the top twelve countries which are relaying spam from compromised computers, show that China has dropped off the list.

Indeed, in the last 12 months Sophos’s research shows that the proportion of spam relayed by Chinese computers has steadily reduced. A new dirty ‘gang of four’ – South Korea, Brazil, India and their ringleader USA – account for over 30% of all the spam relayed by hacked computers around the globe.

The top twelve spam relaying countries for January to March 2010

China meanwhile comes in at 15th place with responsibility for relaying just 1.9% of the world’s spam.