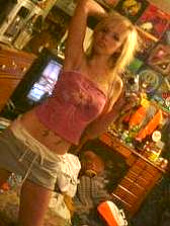 If you judge Ashlee purely on her Twitter profile picture you might imagine she’s an extra from the camp 1960s version of the “Batman” TV series. After all, she certainly appears to be standing on one of those sloping floors typically seen at the baddies’ hideouts.

But her short denim skirt, dirty blonde hair and tattooed navel give the game away that she’s from a less innocent time – the present day. Because Ashlee OConnell (also known as sexysmiles77294) is a Twitter spammer.

Ashlee (or at least the person pulling the strings behind her Twitter profile) has been set up as a honeytrap. Her profile follows random people on Twitter (over 890 in the last week alone) in the hope that, firstly, some will follow back, but also that some curious fellows will click on her links. And if you do click on one of Ashlee’s links you are taken to an adult website. When I visited one of the links I was taking to a website offering to help me find adult sex partners in the UK, with the curious motto: “Go Green. F**k your neighbour”. That may well be environmentally-friendly, but I'm not sure the wife would approve. (Nor, indeed, Norman who lives next door). Arappnelty for a sceentne to be raaedlbe, “it deosn’t mttaer in waht oredr the ltteers in a wrod are, the olny iprmoatnt tihng is taht frist and lsat ltteer is at the rghit pclae”

Ahem. My guess is that spammers like to use this trick to try and defeat routines hunting for spammy messages. And Ashlee, like other Twitter spammers we have seen, peppers her stream of Tweets with innocent-looking messages alongside the blatant plugs for the website.

I’ve reported sexysmiles77294 as a Twitter spammer – and hopefully Twitter will shut down her account soon. But there are hundreds, if not thousands, of other accounts on Twitter that have been set up with disreputable intentions in mind.

Take care out there in the Twittersphere.