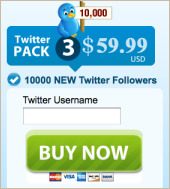 At the end of last week I wrote about thousands of Twitter accounts I had found which were spamming out adverts for a “more followers” website.

Either these users had had their usernames and passwords phished from them, or – in their their hunger for more Twitter followers – they had willingly handed over their credentials to complete strangers. Either way, they were now spewing adverts for dubious online services promising more Twitter followers.

Over the weekend, more Twitter users have fallen victim to the same kind of attack, and I’m seeing evidence of a wider range of websites being promoted, all claiming to offer the ability to increase follower counts. Sites advertised via the spam tweets include:

There are bound to be plenty more, but I don’t recommend that you visit any of them. As you can see in the examples above, some of the sites follow a very similar template – with just minor differences in design. It’s trivial for the people behind these sites to create multiple versions, just changing a graphic here, a few words there.. after all, if they really want is your Twitter username and password so they can spamvertise their site to other unsuspecting souls, and perhaps trick some of the really gullible ones into paying up for a VIP package. If you want more followers on Twitter I think you would be much more sensible to examine the value of the things you Tweet (are they interesting to other people?) rather than thinking there’s a magic spell that can be cast to generate you tens of thousands of new followers.

And even if these sites did conjour up new followers for you – are you confident that they will be followers of any value? Or will they be Twitter accounts that are uninterested in what you have to say or – perhaps – the accounts of other users who have been duped into handing over their username and password to scammers running “More followers” websites?