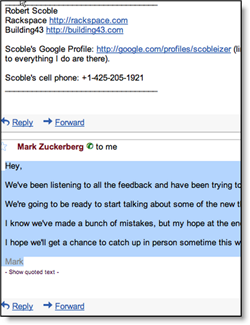 Robert Scoble has just (with permission) published a personal email dialog between himself and Facebook CEO Mark Zuckerberg related to the privacy beating Facebook has taken in the press this month. From Scoble’s GMail Zuckerberg said:

We've been listening to all the feedback and have been trying to distill it down to the key things we need to improve. I'd like to show an improved product rather than just talk about things we might do.

We're going to be ready to start talking about some of the new things we've built this week. I want to make sure we get this stuff right this time.

I know we've made a bunch of mistakes, but my hope at the end of this is that the service ends up in a better place and that people understand that our intentions are in the right place and we respond to the feedback from the people we serve.

I hope we'll get a chance to catch up in person sometime this week. Let me know if you have any thoughts for me before then.

After the fact, Scoble received permission to publish the dialog, but this clearly shows that Zuckerberg is falling victim to the very thing Facebook’s users are falling victim to. Privacy is something that must be practiced with a long-term outlook. Once something is disclosed, it cannot be retracted.

What you decide to post online or share with a brick-and-mortar business is now in the public. It may seem innocent, but 10 years from now you may have many regrets. Historically, these things were only really true for celebrities and politicians, not every teenager, stay-at-home mom, or party animal.

Facebook’s surprise at the public outrage over their changes should have been easy to predict. When users were asked their opinions a large percentage of users spoke out to tell Facebook they didn’t want these changes. If you read into the subtext of Mark’s email, though, he does appear to regret having ignored the feedback Facebook’s users provided.

You cannot predict what you may be proud or ashamed of in the future, and, like the damage to Facebook’s reputation, these things cannot be undone. If you blog, use social media, or have a public profile online, try to limit your exposure. If Facebook’s upcoming privacy changes are enough for you to continue using the service, exercise caution, knowing the future may be a very different place.