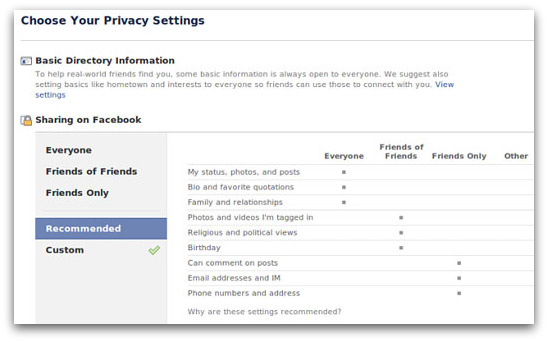 The incredibly popular social networking site has kept the promise it made last week and come up with an attractive and seemingly simpler replacement for what was a terrifying labyrinth of privacy options. And there are some positive changes here. For instance, now you’ll be able to control who can see your friends and pages. That information will no longer have to be public.

You can read more about the new privacy settings interface (it hasn’t yet rolled-out for all users) on Facebook’s website.

In my opinion, Facebook missed a chance to regain the trust of those people who are concerned that it doesn’t take the privacy and safety of its users seriously enough.

If he really really believes that, then why doesn’t he give those users the ability to “opt-in” to share their personal data rather than force people to “opt-out”? After all, if he’s right then that business model would work just fine.

Yes, it would mean a little more effort from those who want to share their private data – but that seems manageable.

Some people have said to me, “You have opted-in. You signed-up with Facebook.”

Well, yes, that’s true of course. And users retain the ability to “opt-out” if they wish. But remember that many folks chose to join Facebook a few years ago, and there’s no doubt that the site has changed since then in its attitude to your data, and the level of control they give regular users over who sees it.

Read Chet’s blog for more information about the new privacy options, and see our poll where we found 93% of people said they would prefer to “opt-in” rather than “opt-out”.

If you’re on Facebook, you might want to join the Sophos page and ensure you are kept up-to-date with the latest security news.