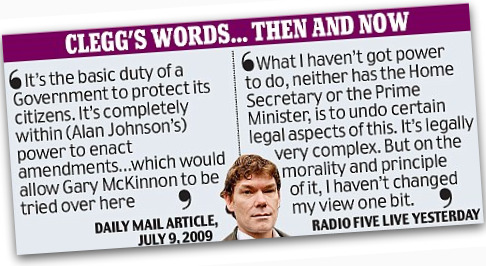 Nick Clegg, the Deputy Prime Minister of the UK, has shocked supporters of Gary McKinnon, by saying that the newly elected British Goverment may not be able to prevent the extradition of the self-confessed NASA hacker. "What I haven't got power to do, neither has the Home Secretary neither has even the Prime Minister, is to completely reverse and undo certain legal aspects of this.

That of course you wouldn't want politicians to do. That's what we are looking at at the moment. It's legally very complex. But on the sort of morality and principle of it, I haven't changed my view one bit."

It would be the right thing to do to have Gary McKinnon tried in this country."

Clegg’s statement has surprised onlookers, as in a newspaper article he wrote last summer he claimed that it was “completely within [the Home Secretary’s] power to enact amendments from the Police and Justice Act, which would allow Gary McKinnon to be tried over here.”

"The only conclusion possible is that the British Government cares more about its relationship with the United States than it does about the welfare of its citizens.

No doubt McKinnon’s many supporters will be hoping that Clegg was right then, and is wrong now.