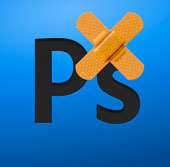 Think that if you keep on-top of your operating system security updates you’re doing a good enough job? Feeling smug that you’ve kept your copy of Adobe Flash and your PDF reader up-to-date? Well, think again. Because that might not be enough.

Critical vulnerabilities have been discovered in Adobe in versions of Adobe Photoshop CS4 for Windows and Macintosh that could allow a hackers to take control of affected computers.

According to a security advisory issued by Adobe, users of Photoshop CS4 version 11.0.1 are advised to update their software, to avoid the vulnerability which could allow a booby-trapped .ASL, .ABR, or .GRD file to hand control over to a remote hacker.

Users of Photoshop CS5 are not impacted by the vulnerability.

So, don’t forget, there is lots of software on your computer which might be in need of a security update, not just the usual suspects.