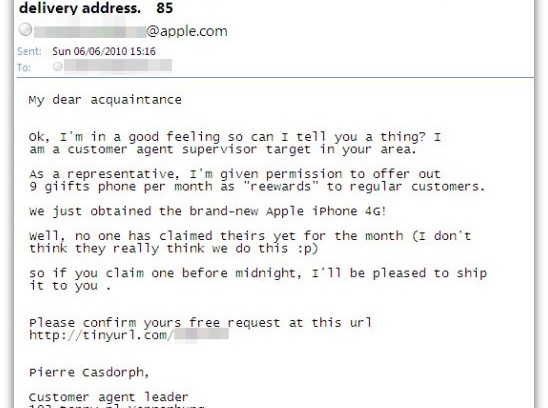 In a few hours time, at Apple’s annual World Wide Developers Conference (WWDC) in San Francisco, Steve Jobs is widely anticipated to announce a new version of his company’s iPhone to an expectant crowd.

The feverish predictions of past occasions may be a little subdued this time, as a prototype device fell into the hands of Gizmodo back in April.

In fact, one of the few hotly discussed questions remaining is what will the new iPhone be called? The iPhone 4G? Well, although that would make numeric sense after the 3GS model, as it is unlikely to support the 4G cellular network it seems unlikely.

Regardless of its moniker, some spammers seem dead set on stealing Steve Jobs’s thunder. At least judging by this spam campaign that I have seen in our traps: Wow! A free iPhone 4G! That’s awfully kind of Apple. And so soon after I was offered a free iPad too. Smirk.

Hopefully no-one would be silly enough to believe this email, even if it had been spell-checked properly. But even if they did, the good news is that the folks at TinyURL have already blocked the link – preventing the unwary from being caught out.