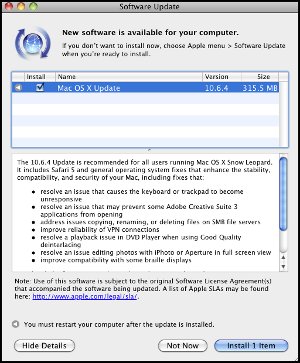 Apple today released version 10.6.4 of its OS X Snow Leopard operating system. As is usual with Apple patches the size and quantity of items patched is quite large.

On my test Mac Mini system, you can see in the screenshot on the right, the update sized approximately 315 megabytes. This is a direct update from 10.6.3 with all other components being up to date. Your mileage may vary…

There are 23 fixes addressed in the list of CVEs from Apple. Applications patched include CUPS, iChat, Kerberos, Samba and Ruby.

Oddly enough Apple also updated the version of Adobe Flash to 10.0.45.2 despite it being vulnerable to a zero-day attack that Adobe fixed last week. There is a critical vulnerability in this version of Flash that has been actively exploited in the wild.

Your Macs, just like your Windows PCs, need to be updated to the latest Flash player. 10.1.53.64 is available from Adobe at http://get.adobe.com/flash. Current Windows releases can also be downloaded at that URL.