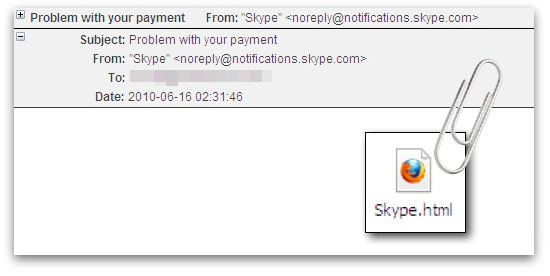 Yesterday I blogged about a widespread spam campaign that posed as a message to “Reset your Facebook password”, but was really designed to redirect you to a Canadian pharmacy website instead. En route you can also be hit by an exploit which attempts to load a booby-trapped PDF and slap you with an infected EXE file via some Java exploits.

Today it looks like the same gang have changed their disguise, spamming out many messages with the subject line “Problem with your payment” pretending to come from noreply@notifications.skype.com.

Clearly the “from” address has been forged, as is common with spam messages, and your suspicions should be aroused by the fact that there is no text in the body of the message but just an attachment called Skype.html. Sophos detects the attachment as Troj/JSRedir-BO, meaning that your browser won’t be redirected to a third-party site as the cybercriminals would wish.

It’s probably a sad reflection on society that there are many people on the internet who wouldn’t think twice of opening a file attached to an email with that subject line.