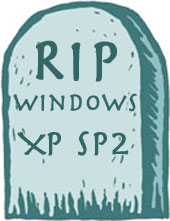 The service pack, which was first released in August 2004, will no longer be supported by Microsoft after Tuesday meaning that users will no longer receive any security patches – regardless of how critical any discovered vulnerability may be.

You may be wondering – “What’s the problem? After all, Windows XP SP3 was released in 2008, and replaced SP2, right?”

Well, yes. It did. But recently published statistics suggest that an alarming 77% of organisations are running Windows XP SP2 on 10% or more of their PCs.

That’s an awful lot of computers which may not be properly protected when a new vulnerability is discovered – and could potentially be vulnerable to a malware attack.

Microsoft would probably like you to update your computers to Windows 7, but that may be a tall order for many older PCs. If you’re not ready for Windows 7, make sure you apply the free update to Windows XP SP3. Windows XP SP3 will be supported by Microsoft until at least April 2014.