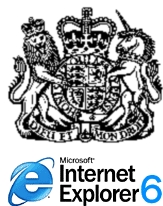 Gulp. At the end of last week, along with thousands of other Brits, I received an email from the UK Government telling me that they had responded to a petition I had signed urging the Prime Minister to encourage government departments to upgrade from Internet Explorer 6.

You can read the UK Government’s response here.

In a nutshell, Her Majesty’s Government says it is more cost-effective to stick with Internet Explorer 6 (which has been dogged with security issues) rather than switch to an alternative browser or a more up-to-date version.

You have to wonder if that’s going to be considered an acceptable excuse by the general public when there’s a serious security breach that exploits a creaky old browser that’s been around since 2001.

Where’s the wisdom in sticking with IE 6 when Microsoft itself has urged users to upgrade to a more secure version, many websites are dropping support for it, and security professionals advise that installations of Internet Explorer 6 should be taken outside and beaten with a heavy stick.

Of course, we have to be realistic. Upgrading and switching browsers isn’t something that a government department can do overnight. IT teams responsible for network management have to ensure that their PCs can properly handle the new version of the browser, and that existing web applications work properly.

But doing nothing is not acceptable from the point of view of security, and sends the wrong message to consumers and businesses across the country. IE 6 simply isn’t a safe place to be anymore, and should be ditched as soon as possible.