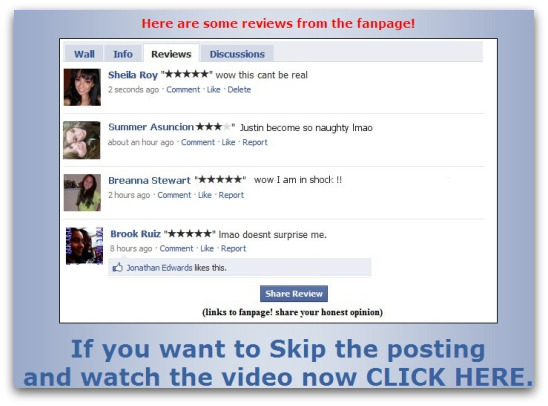 The Facebook survey scammers are up to their dirty tricks again, this time trying to trick you into believing that pint-sized pop phenomenon Justin Bieber has been naughty on his webcam.

For at least the last 24 hours messages have been appearing on the social networking service, seemingly posted by innocent users, saying:

Did you saw how Justin Bieber become naughty on his webcam?

Clicking on the link takes you to a page which poses as a video of Justin Bieber engaged in a webcam video chat with a female admirer. According to the page, Justin Bieber asked random girls on the internet to tease him on his webcam (something, you imagine, that his frenzied female followers might be all too willing to do). Justin asked random girls to tease him on webcam
what they will do ? what he will do ? you will be in shock when you will see the full video !

However, if you were desperate to watch the alleged video you’ll have to jump through some hoops first. As is usual with these type of scams, the pages want you to “Like” and “Share” their contents on Facebook before they will let you see the “shocking video”.

If you’re in any doubt as to whether this is a wise course of action or not, the page displays some “reviews” from other fans confirming how “shocking” and “naughty” the video is. So, the scammers are trying to get you to share the link as much as possible – with the promise of showing you a shocking video of Justin Bieber flirting on a webcam at the end.

Their hope is that you will share the link far and wide, increasing the number of people who might want to go through with the process and – ultimately – take an online survey.

Surveys like this not only scoop up your personal information, but also earn commission for the people who are spreading these links around. In the worst cases they even ask for your cell phone number and sign you up for expensive premium rate services. It’s time that Facebook users got wise to this trick, and refused to play ball.

If there really is a sensational shocking video of Justin Bieber you can be pretty sure that it will be appearing on a sleazy TV news station pretty soon, rather than being hidden behind Facebook pages that make you take surveys and pass on their links.

This isn’t the first time that Justin Bieber has been used as bait by internet scammers, and it won’t be the last.

If you fell for the scam, remove references to it from your profile and newsfeed. In particular, make sure that you have also removed it from the list of “Movies” you like, where it has sneakily placed itself for others to stumble across:

Be careful out there folks, and if you have Facebook friends who you believe are acting unsafely online invite them to join the Sophos page on Facebook.

Update Interestingly, we’re also seeing some attempts to spread this scam via Twitter, apparently deliberately targeting those with an interest in Justin Bieber: Take care online. We’ve been in touch with Bit.ly who have already shut down the link being used by the scammers. Hopefully Facebook will do their best to prevent this and similar messages from spreading also.