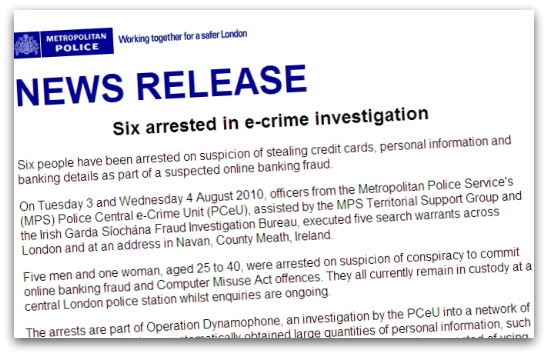 A gang of suspected fraudsters, alleged to have stolen details of more than 20,000 bank accounts and credit cards in an operation that could have netted £3 million (US$4.7 million), have been arrested by authorities in London and Navan, Ireland.

According to a statement by the Metropolitan Police, the Police Central e-Crime Unit (PCeU) and Irish Garda arrested the five men and one women on suspicion of conspiracy to commit online banking fraud and offences under the Computer Misuse Act. The police investigation, dubbed “Operation Dynamophone”, explored a criminal campaign that harvested the details of online bank accounts and credit card numbers after the gang allegedly spammed out large numbers of emails pretending to be from legitimate online banking websites.

Once details had been stolen, the suspected fraudsters are said to have accessed online accounts and transferred funds.

The six people remain in custody as the investigation continues.

Clearly old-fashioned phishing by creating a bogus banking webpage remains a way to make dirty money. Make sure that you have your wits about you, and don’t click too easily on unsolicited links.

One thing puzzles me about this case, though. How on earth do they choose the names of police operations? “Dynamophone” indeed… just so peculiar..