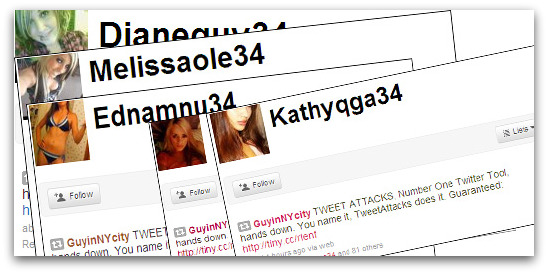 As we discussed in our latest update to the Sophos Security Threat Report, cybercriminals continue to exploit social networks – spreading spam, malware, and stealing identities.

The latest spam campaign we’ve seen on Twitter involves a bevy of beauties. Here are just a small number of the profiles I have seen, all with images of young attractive women (and/or in a state of undress): All of them have recently created Twitter accounts (the last week or so), and all of them are tweeting identical messages pointing users to a service called Tweet Attacks – which encourages you to buy a program that, it says, will help you make money via Twitter.

I don’t know what the Tweet Attacks program does, but if it’s in any way involved in this spam campaign I would stay far away. If you want more followers on Twitter there’s a very simple, tried-and-trusted, method: tweet something that other people might find interesting.