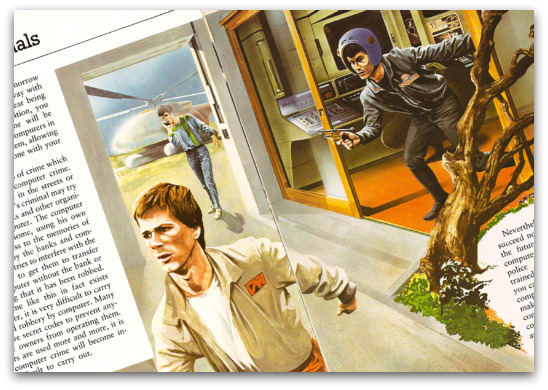 I was sent a link to this marvellous article on the Paleo-Future blog about a book which predicted the future of computer crime.. in 1981.

Here is the double page spread from “School, Work and Play (World of Tomorrow)”: Click the above image to see a larger version, and read the text.

I love stuff like this. It reminds me of my childhood, reading the latest episodes of “The Trigan Empire” in “Look & Learn” magazine, and contemplating that I would actually be alive to see the year 2001..

But boy! Doesn’t this just prove what a hard job it is to predict the future?

As computers are used more and more, it is likely that computer crime will become increasingly difficult to carry out.

And just look at the size of that computer! It’s taking up half of the cybercriminal’s living room. I bet today’s computer crime cops would love to be kitted out with rayguns and sci-fi helicopters though..

If you have some free time, be sure to check out the Paleo-Future blog. It’s quite wonderful.