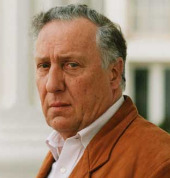 Frederick Forsyth, the famous novelist of such blockbusters as “The Day of the Jackal” and “The Odessa File”, has made the extraordinary claim that US intelligence agencies were so concerned about his trip to the Western African state of Guinea-Bissau last year that they hacked his wife’s laptop.

Thriller-writer Forsyth told the BBC TV programme “Hardtalk” that, while researching his latest novel, he arrived at Bissau airport in the middle of a coup, with the army’s chief assassinated.

On the programme Forsyth explains that he decided to file copy on the incident to The Daily Express newspaper in London, for whom he writes an occasional column, and borrowed a phone to dictate 1,000 words of copy. However, he believes that the Americans were concerned that there was a connection between him (who famously wrote about a fictional West African coup in “The Dogs of War”) and the unrest in the Bissau-Guinea – and intercepted his communication:


"Unfortunately, the American intelligence services listened to it and wasted my wife's computer screen and totalled all her lunch dates... Everything up there in the ether is intercepted, probably by the National Security Agency at Fort Meade in Maryland, and I think my report ended up somewhere on a desk at Fort Meade"

Mr Forsyth mutters about “friends in low places” who confirmed to him that his suspicions that his wife’s computer had been remotely attacked were corrected.

Hmm. It all seems a little far-fetched to me.

I wonder whether it’s more likely that Mrs Forsyth simply experienced a malware infection of the kind that hundreds of thousands of people have to deal with every day?

Of course, that wouldn’t make for such a good story, would it?

If you’re in the UK, you can watch the “Hardtalk” programme featuring Forsyth via BBC iPlayer.