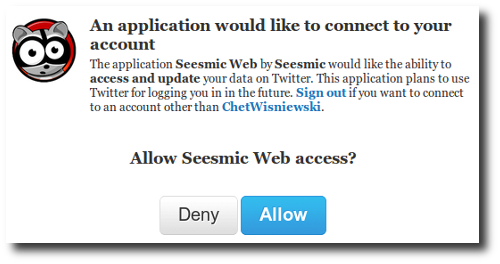 I have been waiting for this day for over a year now. Death to the Twitter HTTP API. Long live OAuth! I have written several times that Twitter needed to get rid of their old, insecure authentication mechanism if they wanted to get a grip on the spam and fraud that has plagued the service since it reached critical mass.

This morning, at 8 A.M. Pacific Daylight Time, Twitter discontinued the availability of the old API. What does this mean for Twitter users? Hopefully not much, aside from a more secure experience with reduced spam and fraud. Moving to OAuth will not entirely eliminate scams from targeting Twitter users, but it will stem the tide of crap and provide users with more granular control of the programs that can tweet on their behalf. Keep in mind that mobile applications like Twitter for Android and iPhone, Tweetdeck, and Twitterific will still prompt you for your username and password to authenticate to Twitter and grant OAuth access to these programs. You should still exercise caution when downloading applications like these and also when using your PC to ensure only trusted services are granted OAuth access.

To wrap up, I already have a great example of what we are likely to see moving forward regarding Twitter fraud. Last night, Mrs. W discovered a rogue application on Twitter that was using people’s accounts to send out spam messages. This application was using the OAuth API to spew its garbage through direct messages to friends of the people who were tricked. Similar to recent Facebook scams, the first thing you had to do to view the amazing video was add the application to your list of approved OAuth applications, enabling it to then spam your friends.

I reported this program to Twitter overnight and within 3 business hours this morning they were able to delete the application from all of the affected users’ profiles. No password resets nor worrying about who might now have your password. A single step allowed Twitter to make their community a safer place.