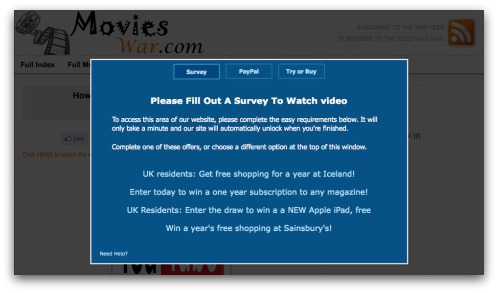 One of the themes that has been coming through loud and clear in the security world for the last few months has been the use by scammers of revenue-generating surveys.

I’ve reported about many of these on the Clu-blog, mostly impacting Facebook users, where unsuspecting computer owners click on a link shared with them via the social networking site only to discover that they have to complete a survey before seeing some typically salacious content. The scammers, meanwhile, earn their crust by receiving a small commission for each survey that is completed.

These survey scams, however, are not just limited to Facebook.

Here’s a message I received via the SophosLabs YouTube channel, for instance: At first glance you may feel flattered that someone has praised the videos you have been making, but in fact the point of the email is to take you to a third-party website.

And, sure enough, if you click on the link a revenue-generating survey will pop up claiming you could win a free new Apple iPad or a year’s free shopping at Sainsbury’s: It doesn’t matter if you receive a message via Facebook, YouTube or traditional email – you should always be suspicious of unsolicited communications and think before you click.