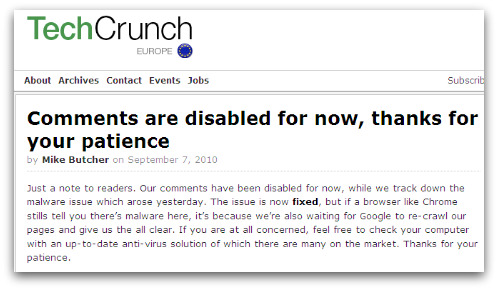 At the start of this week I posted a warning on this blog that the TechCrunch Europe website had fallen victim to a hacking attack, and was spreading malware to its readers.

At the time I was concerned that the popular technology blog had referred on Twitter to malware warnings being seen by readers as “annoying”, and said that I hoped that aside from cleaning-up the infection by a member of the Zbot malware family, they would also post a message onto their site warning users that they could have been infected. Of course, it would have been nice if TechCrunch had posted a warning on its site as soon as the problem was identified – but this is better than nothing! If you visited TechCrunch Europe’s website at the beginning of this week you would be sensible to scan your computer now – just in case.