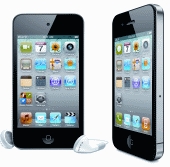 Apple has released iOS 4.1, an updated version of its mobile operating system for the iPhone and iPod Touch.

New features vary depending on which device you own, and how old it is, but some folks will benefit from better photos via HDR (High Dynamic Resolution), Game Center, and the ability to upload high definition video to the likes of YouTube via WiFi.

But these aren’t the only reasons why you might want to consider updating your iPod Touch or iPhone, as the new version of the operating system also includes a number of critical security updates.

Inevitably these haven’t been advertised or mentioned as extensively as the flashy new bells-and-whistles.

Vulnerabilities which are reportedly patched by iOS 4.1 include flaws that could allow hackers to run malicious code on your device by sending you a maliciously-crafted GIF or TIFF image file, or visiting a boobytrapped website. These are techniques which are frequently used by malware authors on other operating systems.

So, as with less sexy desktop-based operating systems, you need to ensure that you keep your iPhone and iPod Touch up-to-date with the latest security patches. If your device can upgrade to iOS 4.1, it would seem like a good idea to do so.

The update is available via iTunes for the iPhone 4, iPhone 3GS, iPhone 3G and iPod Touch 2nd Generation or later.

Separately, claims have emerged that enthusiasts may already have found a way to jailbreak iOS 4.1, allowing users to run unauthorised code on their iPhone or iPod Touch and potentially opening the door for more attacks like the Duh and Ikee worms we saw last year.

There’s speculation that Apple may find this latest jailbreaking vector tricky to defeat in a simple way – as unlike earlier exploits it appears the Cupertino-bsaed firm won’t be able to patch against it via a software update.