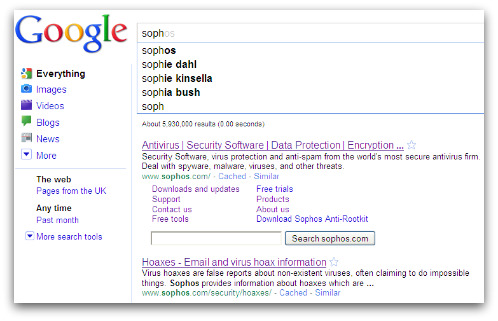 Rich Baldry looks after some of our web protection products here at Sophos, and he’s been thinking about some of the possible implications of Google Instant. Over to you Rich..

So, Google has announced Google Instant – a new enhancement to their core search functionality. Instead of waiting for you to hit the “Search” button, Google will now return and display search results as you type. Apparently the boffins at Google have calculated that this will cut three to five seconds off the average time taken for to complete an internet search.

So with all this new free time after Google Instant appeared on my browser yesterday, I found myself musing on some of the implications of this search revolution.

The first concern I had was bandwidth. While some parts of the world are well endowed with low cost, high bandwidth connectivity, that is still not the case everywhere.

Google says that the bandwidth usage of this feature is not bad compared to streaming video – but isn’t that like a car manufacturer saying their new car is safe compared to water-skiing behind a fighter jet? Many organizations block access to streaming video exactly because of the high bandwidth implications. What’s more relevant is how much Instant increases traffic compared to the classic Google search.

Google also says it’s hoping to launch this on mobile devices – I must remember to turn that off next time I’m roaming outside of Canada. The second issue for me is how it affects my product. We have a feature – popular in the education market – that reports on search terms, allowing school administrators to keep an eye out for potential problems on campus. Now that Google is doing searches as a user types, these reports can get pretty big pretty quickly.

Clearly this is something we’re going to have to address and I’ll be looking for feedback from our customers as to how we should adapt this functionality to accommodate Google Instant. If you have thoughts or ideas about this, feel free to send me a note.

This also got me thinking about the insight that Google Instant gives into the subconscious. How many times have you opened up your browser, started typing in the Google search box and realised that you’ve not written what you intended to write?

All of this information is being sent to Google as you type. By mapping out not only the things you search for, and the results you eventually click on, but also the things you entered by mistake – Freudian slips, things intended for an application that switched focus as you started typing or just the cat walking on your keyboard – it’s possible to build an even more in-depth picture of what makes individuals tick.

In fact, this is nothing new – the auto-completion functionality that suggests search terms as you type has been doing the same thing for some time. But looking at it in this new context made me appreciate how we expose ourselves to the internet much more than we realise.

One comment on “Google Instant – reaching further into your subconscious?”