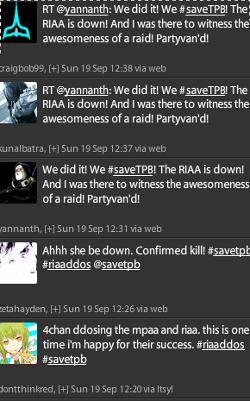 Update 3:BPI went down occasionally for short periods of time, but they seem to have gained the upper hand in defending their site.
Update 2:RIAA is back online as of 9:10 PM Pacific time. The attack on the BPI is so far not working. We may be seeing the end of the LOLz for a bit.
Update: It appears the MPAA is back online, but the RIAA has now been down for close to nine hours. 4chan have announced they will be attacking the BPI (The British Recorded Music Industry) at 4 AM UTC, 9 PM Pacific Daylight Time.

There is a major Distributed Denial of Service (DDoS) attack going on against the RIAA at the moment known as Operation Payback (is a bitch). It appears to be volunteer driven and organized by the group known as 4chan. 4chan, a rather motley group of anonymous pranksters who seem hellbent on anarchy and revenge began by attacking a company called Aiplex at the beginning of the weekend. They continued by orchestrating a full-on assault of the MPAA on Saturday. Aiplex is still offline at this time and the MPAA was down for over 29 hours until 4chan aimed their guns at the RIAA today at 12pm Pacific Daylight Time.

What prompted this? According to The Register, Aiplex was recently employed by Bollywood film makers to DDoS websites hosting BitTorrent trackers who do not respond to takedown notices.

4chan is blaming the RIAA, MPAA, and Aiplex for the DDoS attacks against torrent trackers and with the legal assaults aimed at taking The Pirate Bay offiline. Many people on Twitter and other social media platforms are spreading the word using the hash tag #savetpb.

There are several rather disturbing revelations that are part of this story. First I find it shocking and disappointing that supposedly legitimate media companies are participating in DDoS attacks that are illegal in most jurisdictions. It sets a bad precedent and almost invites this sort of revenge behavior. Those of us that believe copyright has a place and should be respected find it hard to defend the actions of organizations like the RIAA, MPAA and private contractors like Aiplex.

On the flip side what 4chan is doing is illegal in the US, UK and likely other national laws as well. The people who are being lured into participating may not recognize that DDoSing is criminal under the Computer Fraud and Abuse Act. The fact that a few thousand people can bring major websites to their knees is a bit scary. There are rumors that some 4chan members may be using botnets in the attack as well which introduces even more legal concerns.

No matter how you view it this is not a good situation. That a small number of people can hijack parts of the Internet is demonstrative of what could be done if a larger group, or someone with a lot of zombied PCs were to want to wreak havoc on more critical locations. It has been some time since large scale DDoS attacks have been in the news and hopefully it will be awhile before we see this again.

What can you do? No matter how much you may dislike or disagree with the actions of organizations like the RIAA don’t participate in this criminal madness. Make sure your PC is running up to date protection to ensure you aren’t unwittingly participating as part of a botnet. Oh, and don’t piss off 4chan.

As of this time the RIAA.com site is still inaccessible. It has been down for approximately 5 hours.