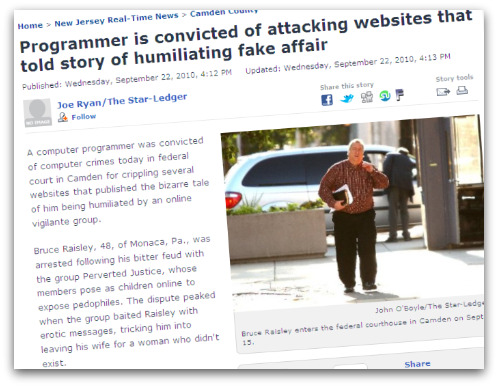 Here’s an extraordinary story of how an internet feud ignited into an attack which involved sadistic revenge, 100,000 compromised computers around the world, divorce and a man with his life in ruins.

A 48-year-old American faces jail after being found guilty of launching a distributed denial-of-service (DDoS) attack against websites that had published humiliating stories about his adulterous “affair” with a fictitious online lover.

Although initially a supporter of the group, Raisley became uncomfortable with the techniques being used by “Perverted Justice” and its leader Xavier Von Erck, questioning the legality of their activities.

A few months later, Raisley told his wife that he was in love with someone else and went to meet “Holly” at Little Rock airport in Arkansas. A photographer hired by Van Erck took pictures of Raisley carrying flowers, waiting for his internet lover, who – obviously – never showed up.

To add to Raisley’s embarrassment, transcripts of his steamy emails with “Holly” and images were posted on the internet.

In the next couple of years, Radar Magazine and Rolling Stone both published stories which described how Von Erck and his Perverted Justice organisation had humiliated Raisley, who by now had lost his job and wife, had no longer had any contact with his son. The articles were republished on the website of the Rick Ross Institute (who provide advice about controversial groups). You can still find the archives of the Radar’s “Strange bedfellows” and Rolling Stone’s ‘To Catch a Predator’: The New American Witch Hunt for Dangerous Pedophiles articles on the Rick Ross website.

Perhaps understandably, Raisley was very keen for the stories to be removed from the internet.

But what he did next was very wrong. Raisey wrote a virus which infected computers around the world, and ordered them to launch attacks against the websites carrying stories about him.

Yesterday, a jury found Bruce Raisley guilty on one count of launching a malicious computer program. He faces a sentence of up to 10 years in jail, and a maximum fine of $250,000.

Raisley is only allowed to use a computer for work until his sentencing, currently scheduled for January 7th, but made a brief statement to the press:

"I forgive Von Erck for what he did to me, and I hope he can forgive me for what I did to him."

It’s a truly sad story, with neither Raisley or Von Erck emerging from proceedings smelling of roses. Hopefully it will act as a cautionary tale for others that becoming an internet vigilante is never a good idea.

One comment on “Man convicted: a story of sadistic revenge, online sex and DDoS attacks”