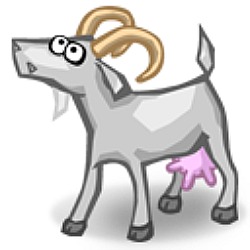 Twitter has responded rapidly to shut down a new worm, which spread vulgar messages from many affected users’ accounts saying they err.. were fond of goats.

Some high profile Twitter users, including Robert Scoble, fell foul of the attack. Of course, having such popular Twitter users affected accelerated the spread of the message. The messages read (look away now if you’re of a nervous disposition):

Users found their accounts were posting the message of goat romance after they clicked on links reading:

Clicking on the WTF link would take you to a webpage which contained some trivial code which used a CSRF (cross-site request forgery) technique to automatically post from the visitor’s Twitter account.

All the user sees if they visit the link is a blank page, but behind the scenes it has sent messages to Twitter to post from your account. The messages obviously couldn’t be sent if you weren’t logged into Twitter at the time you clicked on the link.

Chances are that the reason why this attack spread so speedily is that people were curious to find out what they would find at the end of a link only described as “WTF”.

Twitter has posted an update on its status blog saying that it has disabled the link, and are removing the offending tweets. However, the attack has highlighted an obvious security problem in Twitter which must be addressed as a matter of urgency – otherwise we can expect further (perhaps more dangerous) attacks.

This latest attack comes less than a week after a much more serious worm, which spread rapidly by users just rolling their mouse over tweets.