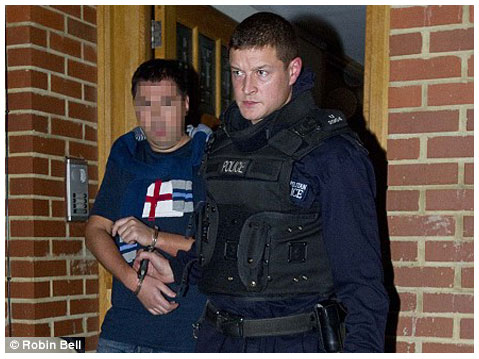 19 people have been arrested by British police, under suspicion that they stole millions of pounds from online bank accounts by installing malware.

Detectives from the Metropolitan Police Central e-Crime Unit (PCeU) swooped a number of addresses in a dawn-time raid in London, arresting 15 men and four women, aged between 23 and 47 years old.

You can see some nice pictures of pixellated faces being taken away by the cops in an article from the Daily Mail newspaper.

Detectives believe that the gang was responsible for stealing £6 million in the last three months, after infecting thousands of computers with a version of the Zbot family of malware.

As well as stealing online banking passwords, ZBot hijacks your computer, making it part of a criminal botnet. Hackers control thousands of compromised computers around the world – using them to spew out spam, spread more malware and launch distributed denial-of-service attacks.

ZBot (also known as Zeus) is a significant malware family – the many different variants of the Trojan in existence have been distributed by hackers in a variety of different disguises.

Arrests like the ones in London don’t mean the end of ZBot – it continues to be available for sale to other criminals via underground websites – but it’s still good news for everyone interested in making the internet a safer place. So hat’s off to the PCeU.

Earlier this year, it was revealed that the PCeU’s budget has been slashed as part of a wave of government cutbacks.

Of course, the authorities should be applauded for investigating suspected internet fraudsters – disrupting their activities before they can impact more innocent people and businesses around the world.

But is the funding present to properly support the investigation of organised cybercrime?