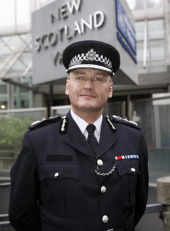 Sir Paul Stephenson, the Metropolitan Police Commissioner, has described how ‘traditional’ organised crime in Britain is “waking up to the profits and uses of e-crime” and that the authorities need to be properly funded to respond.

Writing in the Sunday Telegraph, Sir Paul explained that although the Police Central e-Crime Unit (PCeU) cost £2.75 million last year, it has been estimated that for every £1 spent, it prevented £21 in harm from potential theft.

“If British crime gangs take up e-crime as enthusiastically as we fear, we must match the skills at their disposal,” told the BBC.

And I think the Met Police chief is right to have those concerns. Just last week I reported on how the PCeU had arrested 19 people, suspected of involvement in a gang that stole millions from online bank customers.

If that much money were being stolen from high street banks the old fashioned way (stockings over your head and a Ford Cortina waiting outside) then you would certainly expect it to be investigated as a matter of priority. And yet it seems more and more crimes are now being conducted via the net rather than on the high street.

The backdrop to all this, of course, is that earlier this year the UK government dramatically slashed funding for the PCeU, as part of a wave of cutbacks.