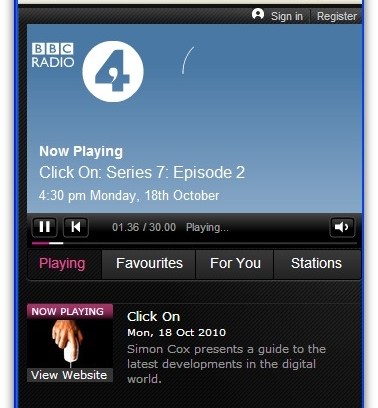 Earlier today, by the power of Skype, I appeared on a BBC Radio 4 programme discussing the internet threats faced by the UK.

This episode of the “Click On” programme was timed perfectly with the unveiling of the National Security Strategy (which I’ve discussed a couple of times today), and Baroness Pauline Neville-Jones, the British Minister of State for Security, was also on the line to share her thoughts. Hostile cyber attacks are making the big headlines in the UK right now, and there’s an interesting discussion about the scale of the threat to British networks, and whether the UK is ready to both defend itself and – perhaps – attack.

Alongside technology journalist Rupert Goodwins I also discuss the Stuxnet worm, which appears to have been written to target critical infrastructure operations such as power stations.

You can find out more and listen to the show online via BBC iPlayer. Don’t worry if you start listening and they appear to be talking about sandwiches – that’s just a food show finishing before the technology guys grab hold of the microphone. 🙂

Be sure to listen if you have the chance. (Sorry, I’m not sure if the programme is available online outside the UK.)