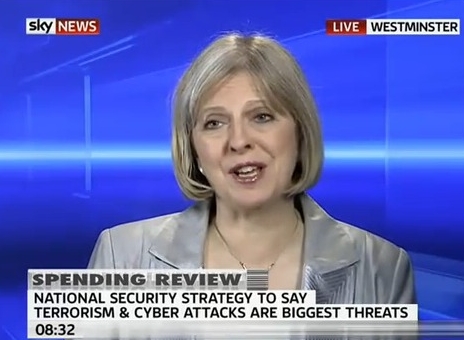 British Home Secretary Theresa May braved the comfy sofa of breakfast television this morning, to tell viewers about a new national security strategy, due to be unveiled today, discussing the threats posed to the UK.

And what are the greatest security threats that Britain faces according to the report? International terrorism and cyber-attacks. The BBC heard from the Home Secretary that cyberwarfare was a “new and growing” danger, echoing comments made last week by the chief of GCHQ last week.

Lurking in the background of Britain’s new National Security Strategy, is tomorrow’s Strategic Defence and Security Review (SDSR), where the government will provide details of how it sees the future of the UK’s armed forces, and describe what sacrifices it will make in order to achieve the 7%-8% savings demanded by the Treasury.

From the way Theresa May is talking, it looks like those responsible for the nation’s internet security won’t have too much to worry about, and some commentators are predicting a £500 million boost in funding for cyber-defences when the SDSR is revealed tomorrow.

500 million quid, eh? I imagine there will be some computer security firms who will be pleased to hear that..

Cynicism aside, the UK’s cyber security strategy is important, and UK citizens should feel reassured that the government is making the right noises. The threat is a real one, not only for the UK but for governments around the world. In addition, cyber security must support the general economic development of the UK moving forward, making it more than just a question of defending against cyber terrorism but of also providing economic confidence and stability to the nation.

It’s important to remember, of course, that computer security isn’t just something that should trouble governments and defence departments. Every one of us with a computer is part of the internet community, and we all need to follow best practices and keep our computers secure. If we act irresponsibly then we’re only making things worse – and more costly – for everybody else.

It would be great to see the British government invest more in educating Joe Public about how to defend their computer, and raise awareness of the internet threats we are all exposed to at home and in the office.

Theresa May also put in an appearance on ITV’s “Daybreak” show, which left me kicking myself as the programme’s researchers had been trying to get me to appear on the show this morning to discuss identity theft and attacks on social networks.

Unfortunately I wasn’t able to be there.

Who knows, maybe I could have had a chin-wag with the Home Secretary?

Hey, never mind, I’ve been on BBC Newsround (can you see me puffing my chest in pride?), Daybreak can wait for another day..