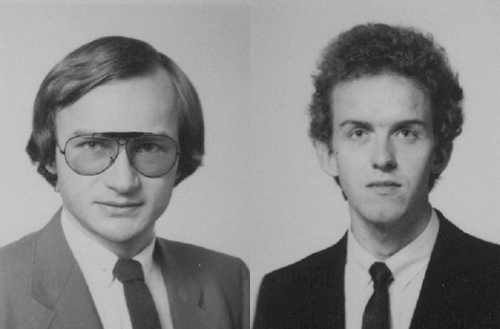 It’s Sophos’s 25th birthday, which seems as good an excuse as any to take a look back.

Jan Hruska and Peter Lammer, the two founders of Sophos, met in Oxford in the mid-1980s. Viruses weren’t really a problem back then, although a handful did exist. Interested in technology, they chose to work together and formed a company called Sophos. (The name, by the way, stems from Ancient Greek meaning “Wise or Learned” – in modern Greek it reportedly means “Smart Ass”). The two started working together, based in a semi-detached house in Kidlington, Oxford. It was just the two of them, a grand piano, and a German Shepherd dog.

Their first venture, however, wasn’t anti-virus software as you might expect.

Instead, they created a “portable” computer called the AC-86. It was no larger than many of today’s notebooks, just thicker. It had a CMOS 8086 chip, made by Harris Semiconductors (under licence from Intel), to give it some processing grunt, and was designed to run DOS version 1.

As you can see in the following image from the archives, the Sharp LCD graphics screen was very small by today’s standards (more like a letterbox) with support for 14 lines of 80 characters. The timing was just plain wrong for the two budding entrepreneurs. Maybe software would be more of a success?

The two then ventured into encryption software for the disk operating system (DOS), and developed encryption (DES and RSA) and authentication (ISO 8731) modules.

In the dark days of DOS, people commonly shared computers (because of expense) and there weren’t passwords and user accounts built into the operating system.

In other words, all users could see everything being done by other computer users. People wanted privacy for their files and encrypting them seemed like a good solution.

After a few years of Sophos selling encryption products, a Norwegian distributor mentioned that securing against the growing number of viruses could be a growth area.

By the late 1980s, many anti-virus companies, including Sophos, had been established around the world. These were small firms, usually with two or three people. The software consisted of simple scanners that performed context searches to detect unique virus code sequences.

And the rest, as they say, is history..

Co-founders Jan Hruska and Peter Lammer continue to serve on Sophos’s board of directors. As you can see, the intervening 25 years haven’t changed them at all.. Today, Sophos has offices around the world and does much more than just protect your computers against malware. Over 100 million business users are protected by our solutions, helping to secure computers in hundreds of countries around the globe.

The-powers-that-be at Sophos are offering non-profit organisations the chance to benefit from 25 free licences for Sophos Endpoint Security & Control as part of our 25th birthday celebrations.

25 free licences for 12 months are available for 25 charities worldwide, just answer a simple question if you’d like to be put in the hat.

What an amazing 25 years it’s been – who can guess what will be the state of computer security will be in another 25 years? If you have any thoughts, or simply want to wish us a happy birthday, leave a comment below.

10 comments on “Sophos: the early years”