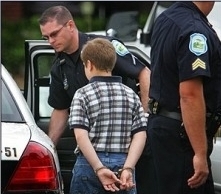 Yet another survey scam is spreading virally across Facebook, earning revenue for the con artists behind it.

You may well be one of the thousands of people who have seen messages like this posted by one of your Facebook friends.

OMG! Look What this Kid did to his School after being Expelled!
After this 11 year old child was expelled from his school he went beserk

If so, please resist the urge to click on it – and instead warn your Facebook friend that they have fallen foul of a scammer.

If you do make the mistake of clicking on the link you will be taken to a third party website which does its best to pretend to be a legitimate Facebook page. Like many other scams we see on Facebook, the webpage encourages you to “Like” it and share the news with your the rest of your Facebook social circle. In this way, the scammers are tricking you into helping them spread their message virally across the network. Once you’ve shared their message, you may believe that you are about to see the content you were initially interested in – you were, after all, promised details of an 11 year old child who went beserk after being expelled from school.

What actually occurs, however, is that you will be presented with a survey – demanding that you complete it before seeing anymore. The survey earns money for the scammers, they get a commission for every survey completed. And that’s why they’re spreading this message virally across Facebook. According to bit.ly’s statistics, over 50,000 people have already clicked on the link – so you can imagine just how much money could be made through a simple scam like this. If you’ve been hit by a scam like this, remove references to it from your newsfeed, and edit your profile to remove any unauthorised pages from your “Likes and interests”.

On Facebook and want to learn more about security threats on the social network and elsewhere on the internet? My recommendation is to join the Sophos Facebook page.

13 comments on “OMG! Kid expelled from his school? No, it’s a viral Facebook survey scam”