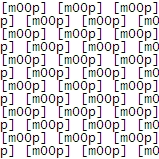 A 33-year-old father of five has been sentenced to 18 months in prison, after spreading malware around the world via millions of spammed out emails.

Matthew Anderson, from Drummuir, Aberdeenshire, was a member of the m00p virus-writing gang spreading malware in 2005 and 2006 including the Stinx Trojan horse, which was spammed out widely across the globe.

The Stinx Trojan horse contained a reference to the m00p gang inside its code.

Other attacks distributed by the international gang included bogus messages which pretended to come from Finnish anti-virus firm F-Secure, tasteless fake emails which posed as CCTV images of a campus rapist, and allegations that George W Bush and Tony Blair were conspiring over oil prices.

All of these were designed to tempt users into clicking on the malicious attachments. Victims of the m00p gang were not limited to home users – hospitals and universities were also struck by the malware attacks.

Once infected by malware from the m00p gang, infected computers could be accessed by remote hackers to steal personal information such as CVs, private photographs, wills, sensitive medical reports and password lists. Victims could even be spied upon via webcams once a backdoor had been opened on the affected computers – webcam images described as “potentially compromising” were found on Anderson’s hard drive.

Southwark Crown Court was told that Anderson carried out the hacking because he enjoyed the feeling of power it gave him.

The offences of Anderson, who used the online handles “aobuluz” and “warpigs”, were described by sentencing Judge Geoffrey Rivlin as being on an “almost unimaginable scale”.

BBC News reports the judge as saying to Anderson:

Detective Constable Bob Burls, who lead the investigation by the Police Central e-Crime Unit, was formally commended by Judge Rivlin.

The PCeU and other international computer crime authorities should be congratulated for investigating this lengthy and involved case and bringing some of its perpetrators to justice.

There needs to be more co-operation around the world to fight cybercrime, and governments need to provide the appropriate funding to investigators to send out a clear message that they’re not being soft on those who abuse the internet.