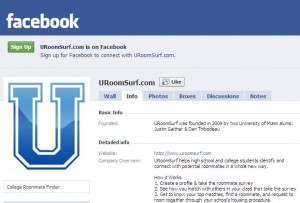 According to the article, RoomSurf, a company which helps high school and college students identify and connect with potential roommates, has launched official-looking Facebook groups representing over 150 US-based colleges.

The Facebook groups look like authorised, university endorsed pages, with official logos alongside warmly welcoming you to the classes of 2015. So the question is why would the company do this? Turns out that those fooled into joining the groups are then allegedly targeted by RoomSurf marketing campaigns: for a fee of about $10 dollars, RoomSurf will find you the perfect roommate.

Many of the unofficial university Facebook pages have been created by a user called Justin Blackwell. whose own Facebook profile is quite clear about his allegiances to RoomSurf.

Interestingly, RoomSurf seems to be also trying to get onto official Facebook university pages, with some posts from Justin Blackwell promoting the unofficial pages.

RoomSurf founders, Justin Gaither and Dan Thibodeau, who have recently changed the company name from URoomSurf, are said to be taking issue ‘with any suggestion of deception’.

Justin Gaiter has however vowed to be more transparent when challenged by some colleges, who were annoyed at the unauthorised use of their logo. I can’t help but wonder how: ‘This is not an official university page but a marketing campaign so we can sign you up to our service’ is hardly going to get many takers.

This is yet another reminder for Facebook users to be careful when joining groups online. The old adage that it must be a duck if it looks and quacks like one holds little water in cyberworld. It is, sadly, rather easy to fake legitimate-looking pages and make them look as though they are endorsed by an official authority.