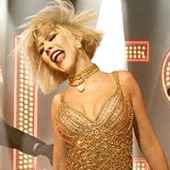 Semi-nude pictures of Christina Aguilera leaked onto the internet earlier this week, causing fans of the pint-sized pop diva to feverishly run to their search engines in the hunt for the private snaps.

Regular readers of the Naked Security site should know only too well about the dangers that can be associated with hunting for such material – with nude pictures of Twilight star Ashley Greene and snaps of princess-to-be Kate Middleton recently being used as bait for the unwary.

It wouldn’t be a surprise if the private photos of Christina Aguilera parading around her huge walk-in wardrobe were also abused in this way by malicious hackers. With Aguilera’s new movie “Burlesque” making the headlines the number of people searching for information about her is only likely to increase.

What’s most interesting to us, though, is that the photographs appear to have not been intentionally leaked to promote her new movie role, but instead the computer of Aguilera’s personal stylist was broken into by a malicious hacker:

"The photos of Christina Aguilera being leaked to the press were illegally obtained by a hacker who tapped into Christina's personal stylist's account. The photos were taken in the privacy of Ms. Aguilera's home and were used only in a personal exchange between the star and her stylist."

Hey, it makes a change from blaming WikiLeaks I guess..

There seem to have been a stream of celebrities who have had their computers (or those belonging to close associates) broken into of late. Earlier this month we spoke about how German authorities believe they have caught two hackers thought to have broken into the computers of over 50 pop stars, including Lady Gaga, Kelly Clarkson and Justin Timberlake.

Interestingly, it is now being reported that one of the hackers – named only as Deniz A or “DJ Stolen”, has written a letter to Lady GaGa apologising for his actions:

Dear Lady Gaga,
I am ashamed of what I have done. I did not think about the consequences. I never thought it would go so far

Burkhard Benecken, Deniz A’s lawyer, says that his client “felt like he was in a movie”, telling AFP that “It is almost unbelievable that such a boy could hack into the accounts of superstars.. He knows he made a mistake.”

18-year-old Deniz A is suspected with his alleged 23-year-old accomplice Christian M of using a Trojan horse to break into computers, stealing music and reportedly attempting to blackmail one star over a “sexually compromising” photograph they had stumbled across.

Whether you’re an A-list celebrity, a flunky hanger-on in a star’s entourage, or just a regular member of the public, it would be wise to take computer security seriously.