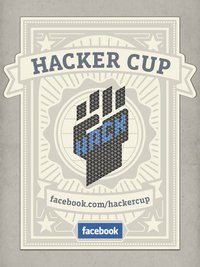 In predictable, gung-ho, forward-looking Facebook style, it’s already documented as “founded 2011”, and as “an annual Facebook programming competition .. for .. a shot at the coveted Hacker Cup.”

I suppose there is no major technical reason why an event that has only happened once can’t be deemed “annual”, which, in turn, makes it equally acceptable to use the term for events which have happened zero times.

(I once got told off for being silly by some role-playing gamers who were discussing dice because I assumed the existence of D0s and D1s*. I still can’t see what their problem was. No imagination, I suppose.)

Hacking is a central part of Facebook's culture. Whether we're building the next big product at one of our Hackathons or creating a smarter search algorithm, we're always hacking to find a better way of doing things.

As many of you will know, I disagreed publicy with Graham Cluley, back in May, about the meaning of the word hacker. Graham wanted to reserve it to refer only to cybercrooks; I was willing to accept that it’s back in common usage with a benign, or even a positive, sense.

Nevertheless, hacker must be considered ambiguous, so it’s a pity Facebook didn’t choose something a bit clearer. After all, their hacker contest is really just a coding competition – not hacking in the most general sense – so it would probably have been doubly better for them to have called it simply the Coders’ Cup.

You can try some practice puzzles, which look like fun. But a couple of examples will probably give you some idea of what makes Facebook tick:

"As a popular engineer, you know many people in your home city. While traveling around town, visiting your friends, you realize it would be really handy to have a program that tells you which of your friends are closest based upon which friend you are currently visiting."

"Facebook is looking for ways to help users find out which friends they interact with the most on the site. Towards that end, you have collected data from your friends regarding who they interacted with on the site."

Here’s what I’d love Facebook to do: pick a better name than “Hacker Cup”, and create some puzzles which explicitly focus on improving privacy and security, rather than on accumulating data about other people or on finding out where they are.

Something to knock on the head the very many scams circulating on Facebook these days would be a good start.

Some scams, I am sorry to say, are largely the fault of thoughtless users – what makes you recommend to all your friends a site you haven’t even seen yet? – but in a “country” of 500 million user accounts, it’s reasonable to expect some sort of effective social security to protect the rest of us from those who just don’t care.

PS: If you like puzzles, check back with Naked Security over the holiday season. I intend to provide some security fun – mainly for those who are stuck at work while many of us enjoy a break. In the meantime, why not practise on last year’s Summer Fun Crossword.

8 comments on “Facebook Hacker Cup – what on earth could they mean?”