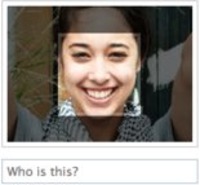 The latest enhancement – or, at least, the latest new feature – announced by Facebook is increased automation for photo tagging.

Unlike graffiti tagging, where you spray-paint your name onto someone else’s property, Facebook lets you paint other people’s names onto your pictures.

So even people who aren’t on Facebook, or who choose not to identify themselves openly in uploaded photos, may nevertheless end up easy-to-find online.

At the end of September, Facebook made it easier to tag individuals en masse, by allowing you to select and annotate a whole group of uploaded photos at once.

Now, you won’t need to select or group the photos yourself. Facebook will use facial recognition to match the people in your photos with other images in which they appear. It’s not yet completely automatic – the tags are just suggestions – but it sounds creepy nevertheless.

You can opt out of auto-suggestion (no pun intended), but it sounds as though this feature is going to be enabled by default, since Facebook’s announcement advises that “you will be able to disable suggested tags in your Privacy Settings.” And you will be notified whenever you’re tagged, but only in case you want to untag yourself, not in order to confirm that you want to be tagged in the first place.

A small mercy is that tagging only works between friends, or what Facebook calls friends, which limits the creepiness somewhat. Nevertheless, it does mean that once you’ve been identified to Facebook by one friend, you run the risk of being identified by Facebook to other friends – even those very loose friends who might not otherwise have remembered you, let alone your name.

If that’s not something you’re comfortable with, then be sure to watch out for this new feature (it’s coming to US users first), and turn it off.

Perhaps, indeed, like the vast majority of readers in our recent poll on this issue, you think that Facebook features should by opt-in by default, rather than opt-out. If so, why not write to Facebook and tell them so?

Don't wait until the regulators in the world's developed economies start legislating to make you do so. Take the lead. People will love you all the more in the end.

More than a decade ago, Scott McNealy, then CEO of then-Sun, famously said, “You have zero privacy anyway. Get over it.”

If you’re on Facebook and want to stay ahead of the curve on security threats, join the thriving community on the Sophos Facebook page.