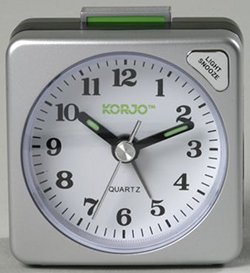 Did you have trouble getting up on New Year’s Morning?

Seems that Apple iPhone users did, even if they hadn’t been out partying the night before, when a bug in iPhone’s clock software prevented the alarm from going off.

According to the New York Times, Apple admitted the bug – though of course they didn’t use the dreaded B-word – and claimed that the problem would sort itself out by Monday 03 January 2011:

Apple did not offer an explanation, but a spokeswoman, Natalie Harrison, acknowledged that the company was "aware of an issue related to nonrepeating alarms set for January 1 or 2." She said all iPhone alarms would begin to work normally on Monday.

But the internet remains abuzz with complaints about failed alarms continuing past the weekend, suggesting either that the bug is not properly understood by Apple, or that iPhone users have adopted the Y2.011K bug as appealingly hi-tech explanation for a late arrival at work on Monday.

After all, unexplained software failure despite use of leading-edge technology is a slicker excuse, with much stronger circumstantial support from Twitter, than old faithfuls such as dodgy kebab and dog ate bus ticket. HR departments, take note. This isn’t the first time in recent years that a Y(2+x/1000)K bug has shown up for small positive integer values of x.

For x=9 (or, more precisely, on New Year’s Eve for x=8), some woeful code in Microsoft’s Zune music player actually caused the device to hang completely when turned on. Removing the battery until the clock forgot the time was the only fix.

For x=10, a whole raft of application woes hit home. SpamAssassin rejected all emails sent in 2010, thinking they were spam; Symantec rejected its own anti-virus updates for the first couple of weeks of the year; and point-of-sale devices in some parts of the world rejected payment cards, thinking that it was already 2016 and thus that every card was long past its expiry date.

And Apple had a different time-related iPhone bug in October 2010. This bug apparently failed to take into account local timezone changes caused by daylight savings (DST). Ironically, the DST bug affected only recurring alarms, whilst the Y.2011K bug affects only non-recurring alarms.

It certainly sounds as though the outrageously large sacks of money thrown at the Y2K problem in the late 1990s were, indeed, wasted.

The Y2K problem was merely a single, specific, example of the many things that can go wrong in software which is responsible for dealing with dates and times. Yet we invested almost entirely in looking for Y2K-specific problems, even where they were already known not to be an issue, instead of improving our overall collective skills in handling internet dates and times across arbitrary time boundaries. So far, Apple still doesn’t seem to have an explanation for the Y2.011K problem. It’s never a good sign when a vendor can’t explain a bug – after all, if they don’t understand it, how can they reliably fix it?

For now, Apple iPhone users can either remember to set recurring alarms, or invest in an apparently-forgotten technological marvel – an alarm clock!

7 comments on “Apple iPhone bug – on-time to the party, late for work?”