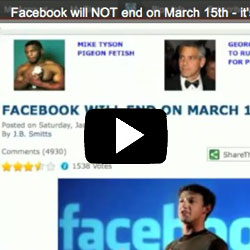 Heard a story that Facebook is going to end on March 15th? You should take it with a pinch of salt.

A story is spreading like wildfire across Facebook this weekend, claiming that the world’s most popular social network is closing on March 15th.

There’s only one problem with the story. It’s not true. Facebook is not going to end on March 15th, and Mark Zuckerberg never said any such thing.

But that’s not stopping many many Facebook users spreading the message.

Many of the messages include a link to an apparent news story, where users can read more about the surprising announcement of Facebook’s death:

If you click on the link, here’s where you are taken. A news story by a publication that also tells us that Mike Tyson is a pigeon fancier, Michelle Obama is pregnant and alien spaceships are to attack earth in 2011: "After March 15th the whole website shuts down," said Avrat Humarthi, Vice President of Technical Affairs at Facebook. "So if you ever want to see your pictures again, I recommend you take them off the internet. You won’t be able to get them back once Facebook goes out of business."

I certainly wouldn’t disagree that users would be wise to have their own backup of their photographs, rather than rely on Facebook – but it’s nothing more than a scare to suggest to people that they have to do it before March 15th because Facebook is going to close down.

Most people would probably never believe such a load of old nonsense as the claim that Mark Zuckerberg is going to shut down Facebook, but it only takes a small proportion of people to think it might be possible to turn a joke of a news story into an internet hoax.

And although a hoax is nothing like as bad as a piece of malware worming its way between users and stealing information, it’s still a nuisance, clogging up communications, increasing the overall level of spam and perhaps leading people to make decisions for the wrong reasons.

Keep your wits about you and stay informed about the latest scams, hoaxes and malware attacks spreading fast across Facebook. One of the best ways to do that is to join the Sophos Facebook page, where more than 90,000 people regularly share information on threats and discuss the latest security news.