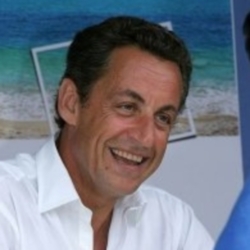 Facebook fans of Nicolas Sarkozy must have got a shock on Sunday night, as the French president appeared to announce that he would not be seeking re-election to the post.

It would obviously be big news if the French head of state announced his resignation, and many francophiles passed the message on to their friends.

According to reports, a poorly spelt update on Sarkozy’s Facebook page said:

"Dear Compatriots, given the exceptional circumstances facing our country I have decided not to put myself up for re-election in 2012."

The post went on to link to another Facebook page, “Farewell to Nicolas Sarkozy”, which suggested people meet outside Le Fouquet’s restaurant in Paris on May 6, 2012, to celebrate his resignation.

In 2007, Sarkozy celebrated his election to French president with celebrity friends such as Johnny Hallyday.

By today, however, the bogus update had been removed and it a message was posted from Sarkozy explaining that his page had fallen foul of hackers.

My feeble schoolboy French translates this as:

"My Facebook account was hacked tonight, perhaps to remind me that no system is foolproof. I will make a note of the writing and spelling lesson, but disagree with the hasty message's conclusion.. Thanks to those who have recognized the error, and thank you again for your support."

This isn’t Nicolas Sarkozy’s first encounter with hackers, of course. Long terms readers of the Naked Security site will remember that he had his bank account hacked back in 2008.

Here’s a YouTube video I made at the time en Franglais (or is it Frenglish?).

Monsieur Sarkozy – please feel free to join the Sophos Facebook page to stay up-to-date on security threats. We’d be delighted to have you join us.

Don’t forget – whether you’re famous or a regular guy in the street, you still need to be careful with your passwords and ensure that hackers can’t break into your online accounts.